How to Use the Present Progressive Spanish 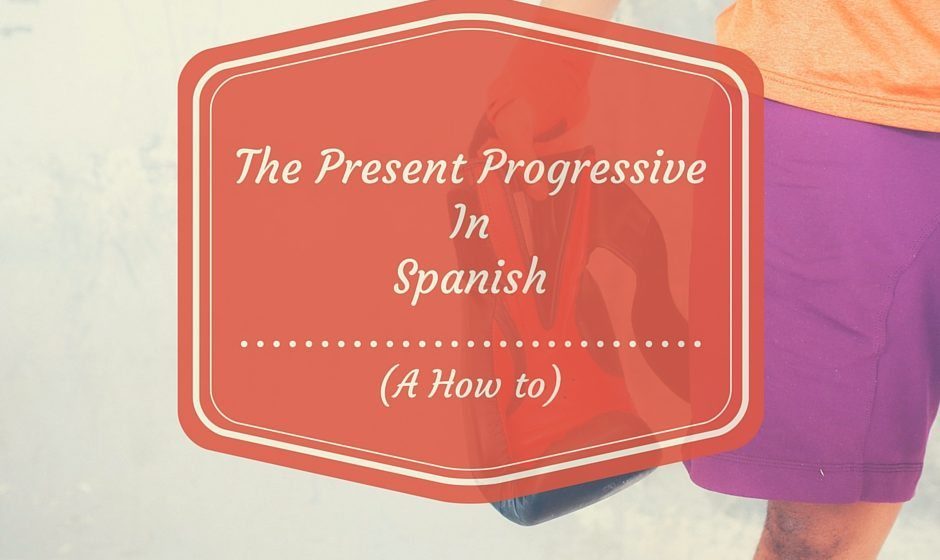 Quite possibly the biggest hurdle you'll have to overcome when learning Spanish is all of the different verb forms. When I was learning Spanish, I first learned how to create the present indicative and the preterite, as these are arguably the most common tenses.

You Already Use the Present Progressive in English Every Day!​

When was the last time you said something like...

"They're still getting ready, hold on a minute."

Probably quite recently, right? Saying that I'm doing such-and-such, you're doing this, and she's doing that are an extremely common expressions in English. As you might notice, this expression is made up of two parts: 1) a form of the verb to be and 2) a gerund.

In case you're not familiar with the word "gerund", it's pronounced "JER-uhnd", and refers to basically any word in English that ends with -ing. English -ing words usually come after a form of the verb to be, but we also sometimes use them as a noun, as in the sentence:  Helping others is a noble thing to do.

What's a Gerund? (In Anthony's words)

Basically any word in English that ends with -ing

We know that the gerund is a noun in that sentence because the verb is follows it, making the gerund the subject of the sentence. But, more on that later.

You can form an infinite number of combinations using the two components, to be and a gerund. Learning the Spanish present progressive opens up a whole new world of sentence possibilities. Let's dive into learning how to talk in Spanish about what's happening in the moment.

​How to Form the Spanish Present Progessive

Just like in English, the Spanish present progressive is formed with a form of to be plus a gerund. If you can remember the two simple steps of finding the correct estar  form and adding the correct gerund, you should have no problems! It's tried and true 🙂

You probably already know that Spanish has two forms of "to be": ser and estar. Note that we use estar for the present progressive, not ser—that would be grammatically incorrect, and people don't say things like Yo soy comiendo even in casual speech.

You're probably already at awesome at conjugating estar, but here's a quick refresher: ​For AR verbs we simply remove the -ar ending and add the -ando ending in its place.

This is a pretty easy change to remember, as it applies to all -ar verbs, and none of them have any stem changes when you make them into a gerund.​

For -er and -ir verbs, to create the gerund you replace the final R with -iendo.

However, if a verb has two different vowels in a row before the final R, oftentimes you will need to change the spelling. For example:​

This spelling change almost always occurs when a word as two vowels next to each other.  Adding the usual -iendo would change the pronunciation.  Instead we add a "y" in the place of the "i" so that -iendo becomes -yendo.  Both endings are pronounced the same.  I think the spelling change makes things easier.

​Just like with a lot of other Spanish verb forms there are a few exceptions to the rules. Some verbs go through a stem change when you're transforming them into the gerund, and you will need to memorize these (there's not really a straight forward rule here).

Here are some common stem-changing gerunds:

You've probably already familiarized yourself with verb irregularities when you learned the simple present. (For example, tener  becomes yo tengo.) Simple memorization will help you get the hang of all the possible gerunds.​

​Once we have our gerund. To create the present progressive,  we simply place the gerund after estar. Some examples:

Using the Present Progressive in Spanish vs. English​

In Spanish the PP isn't used to refer to the future

"I'm going to the beach tomorrow!"​

Sentences like this are extremely common in English. Although you are technically using the present progressive, context indicates that you're actually talking about the future. This doesn't work in Spanish! Don't say something like Mañana estoy tocando el piano—instead, phrase it like Mañana voy a tocar el piano. (Tomorrow I'm going to play the piano.)​

Spanish doesn't use gerunds as nouns​

​"Her singing is very good."

​As mentioned earlier, the gerund can be used in English as what is essentially a noun. This is what the above sentence does. However, you can't use the gerund this way in Spanish. Phrasing it this way—Su cantando es muy bueno—is incorrect. Instead, that sentence would be Ella canta muy bien, or perhaps, Su cantar es muy bueno.

The PP has more emphasis in Spanish

Also compare ¿Qué haces?—whatcha doin?—vs. ¿Qué estás haciendo?, which is more like "What on earth are you're doing?​!

The present progressive in Spanish is fairly similar to that of English, but with a couple of caveats you'll have to remember. If you can learn and master the verb "estar", then you will definitely be able to learn and master the Spanish gerund. Leave a comment if you have any questions!