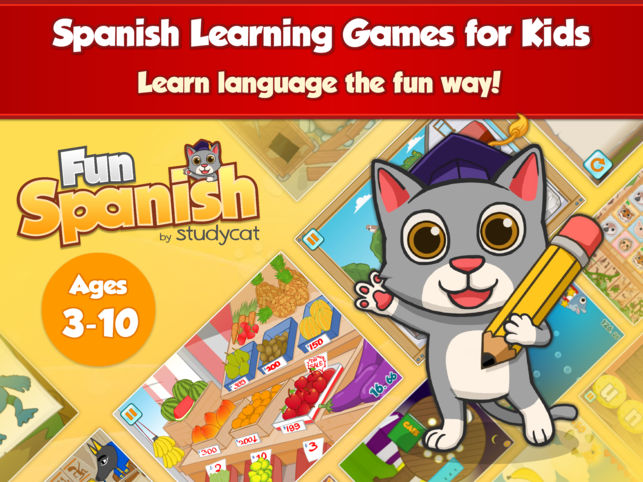 Use: Spanish learning app for children

A but pricey compared to other apps

Kids can quickly figure out how to play the games

The app has a sleek and easy to use layout. Lessons are grouped together under categories like numbers, animals, etc. Each "lesson" is set up more as a stand alone game where children are required to use the Spanish language intuitively.

Fun Spanish uses no English, and if used regularly children will walk away with a basic understanding of Spanish.

The one drawback of the app is its price tag. Compared to other language learning programs and courses it's not bad, but some may be turned off by the fact that the price runs higher than most other mobile apps.

Overall Fun Spanish is worth considering if you're looking for a fun and engaging way for your child to practice and learn Spanish. Upon downloading the app you can access three lesson categories for free, and you also have access to a daily free game.

The method behind Fun Spanish

The methodology behind Fun Spanish is simple: get children to learn while they are at play. The app is specifically designed to engage the natural curiosity of childhood while teaching basic Spanish at the same time.

At no point in Fun Spanish are kids explicitly taught Spanish as they might be in a traditional classroom setting.

Fun Spanish is broken into various categories, each centered on a specific topic such as colors, numbers, or actions. Within each category you will find 4-5 individual games centered on the topic. Think of the categories as lesson units and each game as an individual lesson.

Depending on the topic each game will require the student to engage with the language in a slightly different way. Take some of the games in the "Animals" category. The first game has students match the silhouettes of different animals based on their Spanish name. The name of an animal is spoken and students have to guess which silhouette corresponds with the words.

A second game in the animal's category works similar to bop-a-mole. The name of an animal is called out in either singular form (lion) or plural form (lions). Students then have to tap all the lions (if it's plural), or one lion (if it's singular). They also have to avoid tapping on any other animals that might pop up but are not named.

Just between these two games students will become familiar with common animals in Spanish, and also start recognizing the differences between singular and plural nouns. Not bad for a game!

The rest of the lessons in Fun Spanish are also build around fun games. Each game was designed to help children practice a particular aspect of Spanish vocabulary such as spelling, listening, or even recalling with speech.

Best way to use Fun Spanish

The best way  use to  Fun Spanish is simply to let children explore and play the app on their own. The app is made to be easy to use and figure out. Children will have no trouble jumping right into the games.  All that's really required is to download the app and hand the phone over to your little Spanish learner!

The greatest strength of this app is that it teaches Spanish implicitly. Children can follow their natural curiosity and walk away with a basic Spanish vocabulary and not even realize it.

Language apps that use methods heavy on explicit textbook-like information or rote practice, aren't likely to be a big hit with children. Spanish Fun steps in to bridge the gap between fun and learning.

It doesn't use any English

Fun with Spanish doesn't use any English. This means that all of the input your child receives is in the Spanish language. This game helps learners spell the words they hear

It's pricey for an app

The most common compliant about Fun Spanish has nothing to do with how well the app accomplishes its goal of teaching children Spanish (the majority of users agree that it does).

The chief complaint is that it's a bit expensive for an app.

Users can access three categories for free, along with a daily free game. If you want to use the app beyond these three levels you will have to pony up and pay $1.99 for a single lesson,  $7.99 for a pack of five lessons, or $9.99 to unlock all ten lessons on the app.

In the overall app market this price is high. However, if we were to compare the app's price to other courses, sites, or games in the language learning market, the price seems quite reasonable.

It's a lot harder to design a game that effectively teaches a foreign language than it is to either design just a game or just a language learning app. Thus it's hard not to feel the slightly higher price tag isn't justified in this case.

What people are saying about fun Spanish

This really is the best kids app for learning Spanish. My daughter has been using this app for about 2 years now. She is now ten. This is one of the reasons she loves learning Spanish! This app is fully immersive. It does not speak in English at all. Yet, the child can easily figure out what to do for each game. When it spells words, it even spells in Spanish using the Spanish letter names (not the English letter names). This is how learning to speak a foreign language should be taught.

It is very enjoyable at the same time you are learning. It is full different of learning games which the kids just think of as fun video games, though I can realize how much they have been learning by our conversations at dinner. They actually were starting to speak Spanish! They began to point out things at the store in Spanish. It really teaches them a lot, and they enjoy it too.

There aren't exactly a ton of effective language learning applications aimed at younger children. Fun with Spanish stands out as one of the few.

Yes as an app the price is high, but as an effective way to help your child learn a foreign language...that's pretty near priceless.