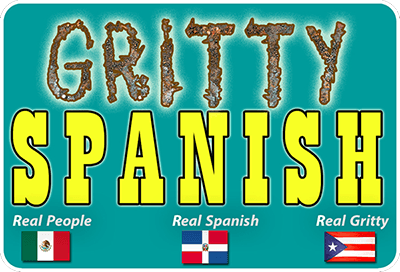 Use it as much or as little as you want

Straightforward and easy to use

Summary: Gritty Spanish is a unique audio based program that helps students learn conversational Spanish. It's centered around recorded Spanish dialogues which come with English and Spanish transcriptions.

Gritty Spanish isn't a full on course, it's primarily a learning tool. It excels at teaching practical phrases in the context of real life situations. The dialogues are also great for developing your Spanish accent or improving your listening skills.

The dialogues also focus on casual conversations. You won't see any of the overly stiff or formal Spanish that you find in other audio based materials. The dialogues are casual to the point of incorporating curse words and colloquial phrases that you're not likely to hear in a traditional Spanish course.

All in all Gritty Spanish is a great option for intermediate learners up to advanced students. Beginners with little experience in Spanish may want to look elsewhere, as Gritty Spanish doesn't provide any help or explicit explanations with grammar.

Is Gritty Spanish Right for you?

If you want to learn conversational Spanish

Most Spanish courses and programs focus only on the most formal uses of the language, not so with Gritty Spanish. In this program you will be inundated with casual/conversational speech, including many figures of speech and colloquial phrases.

If you have some knowledge of the language

Though they do offer a beginner course, Gritty Spanish is best used by students who already have at least some knowledge of Spanish. You'll get the most out of this program if you have a handle on the basics of Spanish grammar.

A sample episode from Gritty Spanish​

If you want to learn how to cuss in Spanish

Gritty Spanish lives up to its name, in that there are a fair amount of curse words throughout the course. Thus you have the opportunity to do something other courses don't usually allow you to do: learn Spanish curse words in context.

Gritty Spanish also comes in a censored version, if you'd rather not pick up the dirty words.

If you want to focus on grammar

If you do learn grammar while working through this program it will be implicitly.  There are no explicit explanations or lessons for Spanish grammar.

If you're an absolute beginner

Because of this program's deemphasis on grammar, it is not ideally suited for those who are completely new to the language.  As we said before it's better to have some working knowledge of Spanish first.

What is Gritty Spanish?

Gritty Spanish is essentially a collection of recorded Spanish dialogues and their written transcriptions (available in both English and Spanish). Students are free to pick and choose which dialogues they want to work with. They are also free to use the dialogues in any way they see fit.

There isn't much here in the way of a structured approach.

Each version has over 30 recorded dialogues for students to work with. Dialogues are recorded at both a regular speed and a slower speed (for newer students).

The original, censored, and Parte II versions are aimed at intermediate to advanced students, while the Beginnings version is designed for beginners.

Every dialogue in Gritty Spanish is designed to leave you with practical Spanish that you're likely to use in a day to day situation. You won't come across any useless sentences like "I have a brown dog" or "The girl is wearing a red shirt".

You can verbatim take phrases from the dialogue and use them the next time you practice with a native speaker. Just be careful with the bad words!

Gritty Spanish's lack of structure make it an immensely flexible learning tool. The way you use the dialogues is up to you. Here's a short excerpt from one of Gritty Spanish transcriptions

The folks behind this program didn't skimp out when it comes to the voice actors in the recorded dialogues. Each version of the program features an array of actors, many with different regional accents (this is a huge asset to developing your listening skills).

Also the actors are convincing. In their own way, they help make the course interesting and even entertaining.

Little to no structure

While the lack of structure can be a pro for many students, it can also be a con. Some learners won't like the lack of direction in Gritty Spanish. There is no guide or walk through. If you're looking for a structured and methodical way to learn Spanish this isn't it.

No explanations are given to help understand why the phrases in the dialogues mean what they mean. As a result you may not be privy to the grammar behind the phrases you're learning. For learners who like to jump right into a language this isn't a huge deal. For others it might be an issue .

What others say about Gritty Spanish I like that Gritty Spanish leaves out the “neutral Spanish” and that it exposes you to different Spanish accents (Puerto Rico, Dominican Republic, Venezuela, etc.) and colloquial vocabulary. I think it is a nice way to expose you to the diverse Spanish accents and vocabulary.

This is not a traditional audio learning program, it is a tool specially focused on listening to native speakers. If you are looking to learn grammar, verb conjugations, etc. you will not find this here. Instead, Gritty Spanish will help you fine tune your ear with Spanish conversations at real speed, with real expressions, from real native speakers.

At the end of the day Gritty Spanish stands as a powerful tool for helping intermediate and advance students improve their core conversation skills. To my knowledge no other course or program quite fills the niche of teaching casual real life Spanish conversations quite like Gritty Spanish.

Beginner students may find other tools and resources more beneficial, but intermediate and advanced learners should definitely check it out!