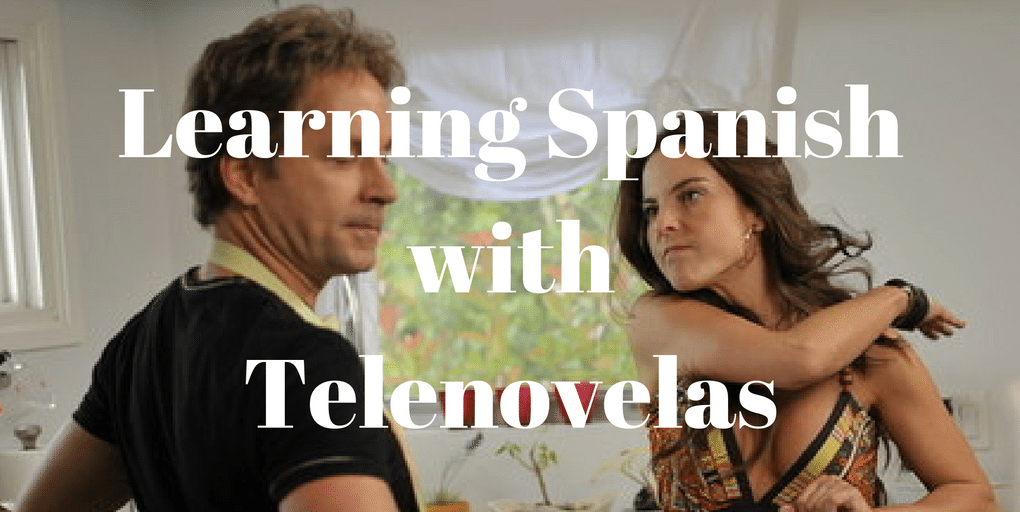 In the Latin culture, telenovelas are all over television and immensely popular. Just like sitcoms and TV dramas are talked about here in the States, telenovelas are the topic of conversation in social settings, the workplace, and even schools.

Ranging from highly romantic, to humorous, and always over dramatic, the plots always leave the audience wanting more. Not only are the episodes entertaining to watch, they also can be used as a learning tool as well. Watching TV to learn Spanish? Sign me up!

What Exactly are Telenovelas?

Telenovelas are serial dramas that are a staple of Latin American TV. These dramas are usually very melodramatic that revolve around star-crossed lovers with lots of plot twists and turns. Most are romantic in nature, but in recent years, Telenovelas have started to tackle social issues as well.

Although telenovelas have been called “Spanish Soap Operas,” they do have their differences. Telenovelas only run a limited amount of episodes and generally only last 6 months to a year. This is very different from English soaps that sometimes go on for decades!

Telenovelas also have the privilege to be run during prime time television, unlike US soaps which are only aired during daytime TV. Originating in Latin America, the telenovela trend has exploded all over the world in a variety of languages.

They are popular in Canada, Europe and in Asia. They are shown on TV in the U.S., however, the trend never took off as well has it has in other countries. You can really only access episodes on the Spanish speaking stations or on Netflix.

Most of the telenovelas highlight the working class life with lots of romantic endeavors, however, there are six major genres in the telenovela world. These six include:

Can Watching Telenovelas Help Me With My Spanish?

Yes, they can!! Telenovelas are a great way to improve your listening and comprehension skills. You can start by finding a genre of your liking on Netflix and pop on the Spanish subtitles. Listening to the audio and visually seeing the subtitles will help you learn the context of words. Do not hesitate to pause the episode or switch to the English subtitles if need be. This is a great way if you are struggling with specific tenses like the preterite and imperfect.

Not only can telenovelas help you with learning Spanish, they are also a great way to learn more about the Latino/Hispanic culture. They give you window into the lives of others by showcasing food, religion, culture, and even fashion. It is a fantastic way to immerse yourself without having to buy a plane ticket.

The best part about these shows is that they provide a fun and engaging way to learn Spanish. The shows are entertaining and very addictive which will have you racing home to learn. Not only will you remember more, but you will also be able to apply and practice your Spanish with each episode. Soon you will find yourself yelling at the TV in Spanish when your favorite character makes a poor life decision!

There are so Many! Which Ones Should I Watch?

There are a lot of great telenovelas out there and it can be confusing knowing where to start. Here are a few to get you started and worth checking out:

This Mexican telenovela is considered to be one of the most successful shows and is broadcasted in over 180 countries around the world! Produced in 1995, this working-class melodrama is actually the last segment of the Maria Trilogies (Trilogía de las Marías). María Hernández is a young working class girl who loses her godmother/guardian at age 15. Taken in by a wealthy businessman, María is taught how to adjust and live in a world with money.

Over time, she catches the eye of the eldest son of the family, Luis, who falls in love with her. This causes Luis’s mother as well as other member of the family to instantly hate María, boasting that she is below Luis. Slowly, María begins to win the hearts of the residents and employees of the house, but not without some setbacks along the way.

Set and filmed in Bogota, Colombia, this romantic comedy is considered to be the first telenovela to make it big worldwide. Remember the U.S. sitcom, Ugly Betty? Well, it was a spin off of this telenovela! Due to it’s popularity around the world, Yo Soy Betty has been given credit to bringing telenovelas to a whole new level of success. Beatriz Aurora Pinzón Solano (aka Betty) is a secretary at EcoModa, a fashion empire. Betty is actually a brilliant economist but is not taken seriously due to her looks. The irony of an unattractive secretary at a fashion empire does not go unnoticed in the workplace. Shortly after being hired, others begin to what an asset Betty is, including her boss, Armando. Of course, Betty falls in love with Armando but keeps her feelings a secret.

EcoModa goes through many financial struggles and it is Armando that calls on Betty to help him out. Will Armando find out the truth of Betty’s feelings? Guess you will just have to watch to find out!

This thriller series is a fictional representation of the life of Pablo Escobar, the Colombian drug lord. The creators of this show, Camilo Cano and Juana Uribe, are no strangers to the real life Escobar. Pablo murdered Cano’s father and kidnapped Uribe’s mother at one point. The shows popularity is not without controversy as many viewers have criticized different aspects of the series. The series begins with a scene of Escobar’s last moments before being shot to death by the Colombian National Police. Pablo has a flashback to his childhood where the viewers are given insight into how he grew up, and where his influences to live a life of organized crime came from. If you are planning to converse with Colombian’s in a very informal setting, this is a great show for you to watch. The series uses a lot of Colombian slang that can be beneficial to a Spanish learner. The show also uses a lot of profanity, so make sure you know what you are saying before you try out your “new” words.

Telenovelas are a great way to to learn and practice your Spanish in a fun and exciting way. The episodes will immerse you into the language and culture with their humorous, romantic or mysterious plots. Now, when you travel to a Spanish speaking country, you will be ready to engage in conversation about telenovelas and which ones you like best. The only thing you really have to worry about is becoming addicted to them!