How Long Does it Take to Learn Spanish? 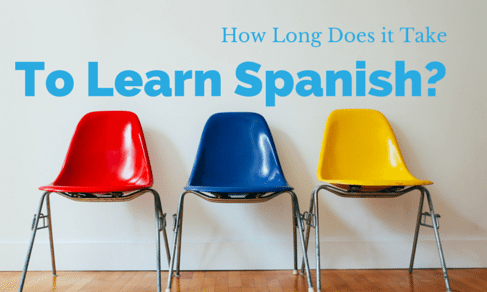 Quick Navigation
It takes years to learn Spanish...right??
How to measure fluency in Spanish
How long it takes to reach fluency in Spanish?
Breaking Down the Myth of Years
Learning Spanish is a flexible process

It takes years to learn Spanish...right??

For me the idea of learning a foreign language always seemed like nothing more than a vague daydream I would occasionally slip into whenever I thought of traveling.  There was never a question as to whether or not I would learn a new language because the answer was of course a definitive "no".

Like most people I figured you had to be born into a language, be a genius, or spend years of cold hard studying in order to speak one. After all, I know many people who took several years of French, Spanish, or some other language and had little to show for it. There was no way I'd ever have the time (years) or money ($100's) to commit to the idea.

Maybe when I'm old and retired I can try...like I said it wasn't for me.

Then on a blog (I forget which one) I came across a book by a guy who learns languages in 3 months.  It seemed interesting so I bought it.  Then I found videos on Youtube of yet another polyglot who also measured his language learning in months, not years. Then I found a a blog written by another guy, and then another....

I started to realize that maybe my assumptions about learning Spanish were way off. It seems quite possible that you could learn a language in months versus years.

Now I don't know if anyone could give you an exact estimate of how long it will take you to learn Spanish as a native English speaker, but here are some resources that help give you an rough idea.

How to measure fluency in Spanish

The first question we have to answer here is what do we mean by “learn Spanish"? I’m going to go out on a limb and guess that when most people think of learning Spanish they think of speaking it with native speakers, and doing so fairly comfortably. This is what is often referred to as being fluent, though some also might refer to it as being proficient.

What is fluency? Google will define it as “the ability to speak or write a foreign language accurately.” That definition helps a little, but the best tool I've found to measure my fluency in Spanish is the CEFR.

One of the most widely used gauges of language learning,the Common European Framework of Reference for Languages (or CEFR) was made by the European Council and is comprised of six proficiency levels. An Overview of the CEFR via glottovolante.blogspot.com

This in depth framework for language learning takes out the guesswork when figuring out what level your Spanish is at. A lot of teachers and courses use this framework to help define their courses. You'll often see classes for A2 Spanish, or find a course that will take to a B1. Now you know what they are referring to.

How long it takes to reach fluency in Spanish?

The Foreign Service Institute (FSI) has an often cited ranking of languages based on how hard it is for your average English speaker to learn them.  The FSI is an institution within the United States government that trains federal employees and diplomats for foreign affairs duties including language learning.

They actually have a totally free Spanish learning curriculum you can read about here.

Check out the stats in this chart:

Looks like Spanish takes roughly 600 hours of classroom teaching in addition to 3 hours of independent practice per week., according the FSI. Now there are probably other sources that may disagree with this, but I’m just citing it so you have some kind of ballpark figure.

Now emphasis on the word ballpark here, I don’t think you should see this chart and then think “Cool so if I take 600 hours of Spanish classes then I will be fluent.” How fast you learn a language greatly depends on the method and environment you learn it in, as well as how much effort you put in.

Breaking Down the Myth of Years

This chart clearly says that you will need at least 600 hundred classroom hours to be fluent in Spanish. If you took a regular 3 hours a week college course and never did your homework then it would take you almost 4 years to become fluent, hence my idea that I needed years to learn a language.  But then there’s this guy:

With a long history of failing at foreign languages learning he was able to become conversational in French in just a few months by teaching himself primarily through automated flashcards. You can check out his book here.

A rather well known polyglot (someone who speaks a bunch of languages) who learns to be conversational in a new language in just 3 months. Now he probably does put in 600 hours because his immersion bubble is very big. He more or less limits himself to only using his target language for those 3 months.

He literally lives his life in a foreign language and thus learns very fast.

So what does one hour of studying mean, an hour spent in a classroom, an hour long conversation with a native, or an hour of watching a movie in Spanish? All three methods of study will help you learn more Spanish but they can differ in how much you will learn and what aspects of the language you will learn.

Learning Spanish is a flexible process

What’s important here is that there are no hard and fast rules to learning a language. It highly depends on what your goals are, what method(s) you use to learn, and how consistently you stick to the learning process. I used the example of watching Spanish movies.

Let’s say you started watching a few and found you liked them and then started watching a movie in Spanish every night. Does that count as “Classroom time?” probably not, but it’s fun and when you’re having fun with a language you’ll find that you stop keeping track of the hours and start to enjoy it and want to know a little more and then a little more. Now, unless you reinforce what you learn while you watch you probably won't get fluent very fast on Netflix. (I wrote an article about how to actively learn Spanish with Netflix. Check it out here.)

Also you're a lot less likely to count hours learning a new language if you learn it in a way that is engaging and exciting. 30 minutes talking to another person in a foreign language will go by a lot faster than 30 minutes in a grammar lecture. Fluentu ﻿provides native Spanish videos with a built in subtitle and vocabulary system. You can watch real Spanish videos (commercials, tv clips, music, etc) and learn words in a real life context. It also has its own flashcard system and other learning resources. Check out our in-depth ﻿﻿﻿﻿review﻿﻿﻿﻿!

SpanishPod101 ﻿﻿﻿﻿teaches Spanish primarily through audio based lessons. Their site also has a lot of extra features like in-site flashcards and vocabulary quizzes. Their lessons are especially good at helping you developing your listening skills and are great you have to learn on the go.​ Check out our in-depth ﻿﻿﻿review﻿﻿﻿!

Doing things like actively studying through watching movies, talking with native speakers on Skype, or learning aboard through an immersion program will make the learning process fun.

Now you know how to estimate how long it will take you reach your desired level of Spanish. Whatever your goals, don't the fear and myth of spending fruitless years studying with your nose in a book scare you away.