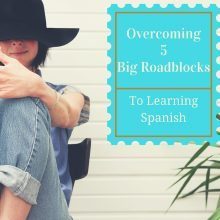 Learning a new language can be a very daunting prospect for most people, especially if they’ve lived all of their lives speaking only one tongue. Even for bilingual people, going beyond their mother tongue and learned language is usually quite challenging, especially with all the new rules, syntax and even colloquialisms that you have to learn anew—which can be worlds apart from the languages you already speak.

Being able to speak and understand a new language can be very fulfilling, however, especially if you’re traveling in another country or if you have friends who are native speakers. It opens up your mind to new possibilities. You become more comfortable with the environment. You can move around and connect with people without fear of being left out or being misunderstood.

There are, however, a few big roadblocks that can hinder you from becoming an effective learner when it comes to languages like Spanish and even others. Here, we will discuss the most common challenges and how to overcome them.

Listening is perhaps the first step to learning a new language. You might start out wanting to learn Spanish, as you probably want to travel to places like Mexico, South America or Spain. The first step is actually listening in to conversations as they happen, or looking for Spanish content on the media, such as TV, radio or the Internet.

You can start picking up a few key words and phrases just by listening in. You might also be able to learn some of the nuances of the language (such as formal vis-à-vis informal usage, or even colloquialisms) by listening to people talking in the language.

Aside from finding interesting Spanish-language TV or radio shows, you can also train yourself with audible and visual clues through desktop or smartphone apps. One example is Genuis, a flash-card app that you can load up with any kind of content. Another is Duolingo. Simply exposing yourself to the richness of the Spanish language can help you improve your listening skills. The worst way to fail is by not trying in the first place. Learning a new language takes a lot of time and effort. You will also need to be confident enough to make a few mistakes while you learn and practice. Don’t be afraid that people will make fun of you or that you’ll sound silly when you make a mistake in pronunciation or grammar.

Practice makes perfect, and you should learn from your mistakes, rather than get frustrated by them. Don’t be afraid to sound silly for a few times while you practice. You’ll catch on soon enough. Besides, some experts would say that one of the best ways to learn a language is by making mistakes--and being able to correct yourself along the way.

Consider this: our school systems are often obsessed with perfection and always getting things right, and students are therefore graded according to their correct answers. This may be okay with most subjects, but learning a new language, you can actually refine your language skills by picking yourself up after making mistakes.

Perhaps the best way to practice Spanish is by finding a bilingual friend and talking about topics you are both comfortable with in Spanish. This way, you won’t be too embarrassed if you make mistakes or if you slip up. Practicing with someone you are comfortable with can truly build up your confidence.

Sage advice: If you fail to plan, you plan to fail. Goal-setting is another important aspect of learning a new language like Spanish. If you don’t have clear-cut goals, you will not get the motivation to take the step toward learning the language.

Mind you, your goals do not necessarily have to be too big. You can set small goals and tick them off as accomplishments once you have reached them. For instance, it’s a good idea to first learn a few words pertaining to objects within reach or within your house. You can then work on progressively expanding your vocabulary from here. Otherwise, planning to understand an entire language in the course of a week might be too daunting.

When learning Spanish, you can start from the basic vocabulary, then progress to popular or useful phrases. Try going to Omniglot, for example, which has a list of useful phrases in Spanish, along with other languages. Once you have mastered a few phrases, you can then move on to conversational Spanish.

You can set daily goals for yourself. Even if you only master one single phrase per day, you’ll already be able to master hundreds in any given year.​ #4 – Being Closed to Other Cultures

Xenophobia has done the world nothing but harm. Given the hundreds of cultures out there, it pays to learn a few things about how other people act and think when learning a new language. Knowing a language does not only mean you can understand and speak it; you also need to understand the context that influences the language.

In fact, the best way to learn another language is to become immersed in the culture itself. It’s one thing to study formal courses in other languages. It’s an entirely different thing to actually live in a city or community that speaks the language. Living in Madrid, San Jose, or Buenos Aires helps you gain insights on the nuances of Spanish in each of these cities. Moreover, Spanish itself has major variations in each country or city where it is an official language.

One way to immerse yourself in the culture of a Spanish-speaking country is by keeping yourself abreast of the news and current events there. For example, you can switch your News app to a localized version (Spain, Mexico or other countries), so you can keep yourself updated with what’s happening there. It helps you feel as if you’re part of the local community, even if you live hundreds of miles away.

#5 – Ignoring the Power of Connections​

Of course, it’s not exactly easy to move to another city altogether. The next best thing would be to immerse yourself in the company of people who speak the language and can help you translate Spanish to English​. Maybe you have friends, colleagues or neighbors who are fluent in Spanish, or who come from another country or city that speaks Spanish. Conversing with them would be an excellent means to build up your own skills.

If you can’t find anyone within your own network of friends and acquaintances, you can find a language partner through dedicated apps like Italki. Of course, you can also try following people speaking Spanish on Twitter or another social network.

​Learning a new language can be exciting, challenging and also frustrating at times, but there are many ways to get yourself educated on the nuances of Spanish. More than simply learning in a formal setting, though, it would help a great deal if you could expose yourself to the people, culture and community. In addition, you will need to trust yourself enough not to just learn the language, but to actually live the language.

Learning a new language has a lot of cognitive benefits. However, living a new language altogether will open up a whole new world for you, as you can gain new perspectives, new friends and new opportunities that are simply not possible when you limit yourself to a single tongue.​

Sean Patrick Hopwood is a language polyglot and a language enthusiast. He is also the President and Founder at Day Translations, Inc., a global translation company.