Spanish Vocabulary for the Workplace 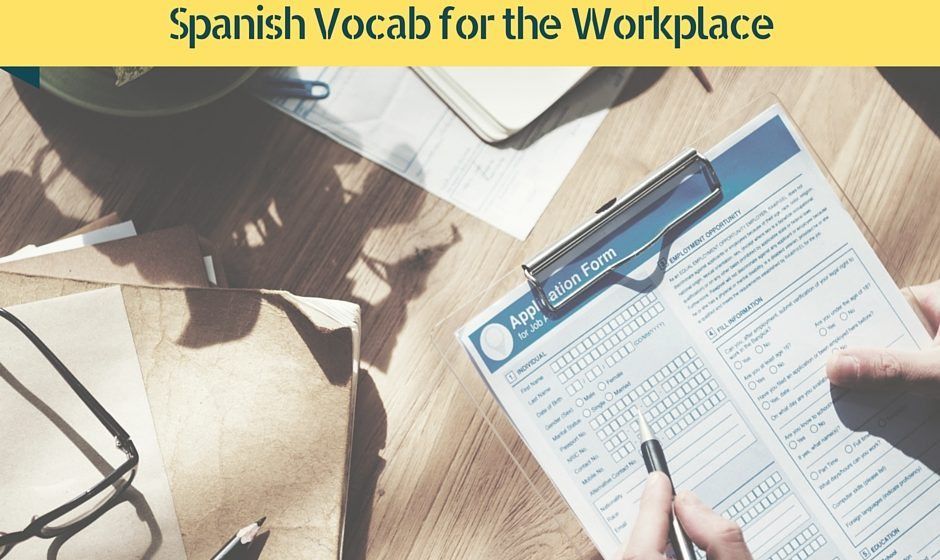 Mexico and other Spanish speaking countries sometimes have a “playland” image, especially for ex-pats and travelers; but it’s a hard-working country and it’s good to know the talk for the workaday world. Apart from that, it becomes obvious that English uses the word “work” in many ways that have nothing to do with labor, and don’t translate simply into Spanish.

A Working Knowledge of Spanish

For openers, most know the noun (trabajo) and verb (trabajar) for “work” or “labor”, and that a worker is a trabajador (and that the hombres trabajando sign means “men working.”

There is also chamba, a slangier version of “job” like we would say “gig”, perhaps.  And thus chambear/chambeadoras means “working girls”.

To quit is renunciar, a meaning of “renounce” you’d seldom think of in English. A strike is a huelga—and generally accompanied by signs, banners, and even clothing, in red and black--unions are sindicatos.

“Help wanted” signs generally use the verb solicitor, as in Se solicitan cocineros.​

Doing What… And For How Much?

What do you do? A simple question often raised in common conversation is “So what do you do?” This trips foreigners up because ¿Que haces?  is meaningless for that context in Spanish, heard as simply “What are you doing?”

You learn to phrase the question in terms of “what do you dedicate yourself to”, which actually makes more sense when you think about it. So the basic career/job identity question is  ¿A que te dedicas? And the statement of being an accountant would be something like Me dedico a la contabilidad.

How much do you make?

Coincidentally, the question, “What do you make?” which in English might be understood as “how much pay do you make?” would be the exact same question in Spanish, and just as meaningless. The word in use is ganar; same word as “win”, which makes sense when you consider terms like “breadwinner”.

Your pay is pago, from the word pagar that you see over cash registers and other places to pay up. (And making it pretty obvious what terms like no pagado or mal pago mean. Regular pay, or salary is sueldo. Hourly pay is generally earned through a shift or torno; “working hours” or “schedule” specified as the horario.

Does it work? (function)

Something to be aware of is that Spanish makes much less use than English of terms like “It doesn’t work” or “It’s not working”: there are other ways to get that concept across.The most noticeable way of saying something is not “in working order” is no sirve. Saying, in effect, it’s “out of service”.

You learn that this can be applied to anything from a broken appliance to unworkable ideas to people deemed useless or no-good.In the narrow realm of motors, vehicles and objects in motion, you also run into the use of andar, and thus shade meanings of “it isn’t going”. You can say a car no anda or apply the same term to the motor not turning over.

An obvious use of a term very close to “working” would be funcionar: something not working is blatantly not functioning. A useful application of this would be towards concepts or solutions working out or not: Saying, Su idea de alinear los alumnus no función, for “His idea of lining the students up didn’t work”. Or stating “Her old dress works as a bathrobe”, as su vestida vieja funcióna como bata.

Another, rather abstractly related, word to keep in mind is resultar. No resulto definitely has the sense of “it didn’t work out”, as well as the more common meaning equivalent to English “turned out”, so “turns out girls didn’t want his designs” would be resulta que las muchachas no quieren llevar sus chanclas  and sus diseños no resultaron exitosos for “His designs didn’t work out.”​

Linton Robinson has been a professional writer for far too long. Under his nombre de pluma "Cabo Bob" he's achieved notoriety, if not infamy, in Mexican slang circles. You can check out his site at http://linrobinson.com/home/spanish/