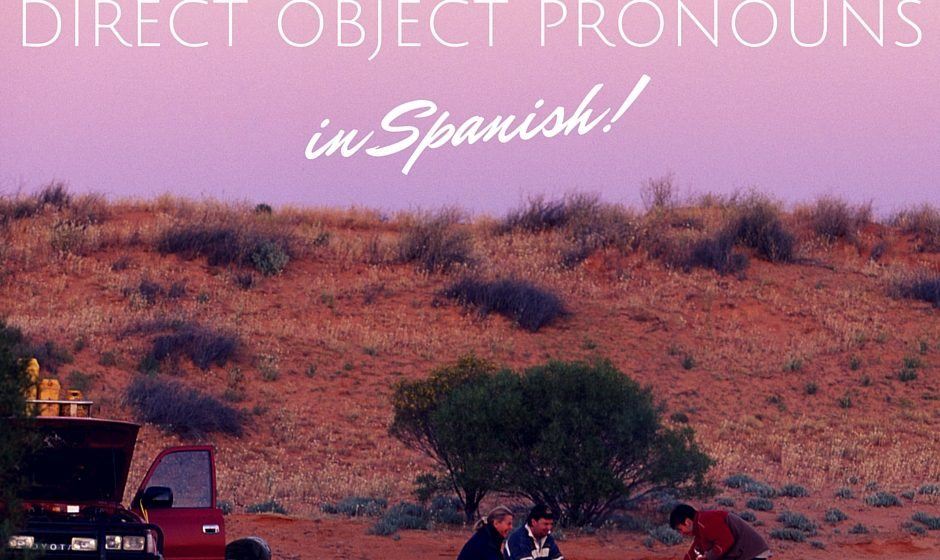 In most of my grammar posts I start off by telling how a particular grammar point was hard for me at first but then became easier as my Spanish progressed.  Well this time I'm not going to do that because the truth is I never had that many problems with using direct object pronouns in Spanish.

They're pretty straightforward.  Once you know what they are and how to use them you should have no problem incorporating them into your Spanish.

What is a direct object?

How we use direct objects in English

A direct object is the person, place, or thing the receives the action in a sentence.  For example:​

In this instance the direct objection would be the taco because it is what is being eaten. Let's try another:

In this case Penélope would be the direct object because she is the one getting kissed.  Not hard right?

Now what if we took the same first sentence and added another action to it:

I stole the taco then I ate the taco.

Now technically I guess this sentence is correct, but it sounds weird because we're saying taco twice. The sentence would sound much more natural if we traded one of these tacos (the direct object) for another word (a pronoun):

I stole your taco then I ate it.

*No tacos were stolen during the writing of this post

See what we did there? Instead of having to say taco every time we can use the word it. We can do something similar with the second sentence substituting Penélope for the pronoun her:

How we use direct objects in Spanish

In Spanish direct object pronouns are used in a similar way with one key difference: Instead of putting the direct object behind the verb, in Spanish we usually put in front of the verb.

Here's our taco and kissing sentences again, but this time in Spanish:

Now just like we did in English we can substitute the direct object nouns for pronouns only this time we put them in front of the verb:

In English we only have 4 direct object pronouns (it, he, she, them, & us) but in Spanish there are 8:

Anytime you are using me, te, nos, or vos you don't have to worry about gender.  However when you find yourself using the other four pronouns the gender will matter. Going back to our Spanish examples sentences:

Using DOP's with more than one verb

If we run into a sentence that has more than one verb like:​

No puedo beber el refresco. ( I can't drink the soda)

We would still be completely correct if we put the pronoun before the first verb:

But because there are two verbs we also have the option of putting the pronoun behind the second infinitive verb:

Both are correct. NEVER put the pronoun between the two verbs.

These pronouns are pretty easy to use once you understand the rules behind them.  They also make your spoken Spanish sound that much more natural when you use them right!