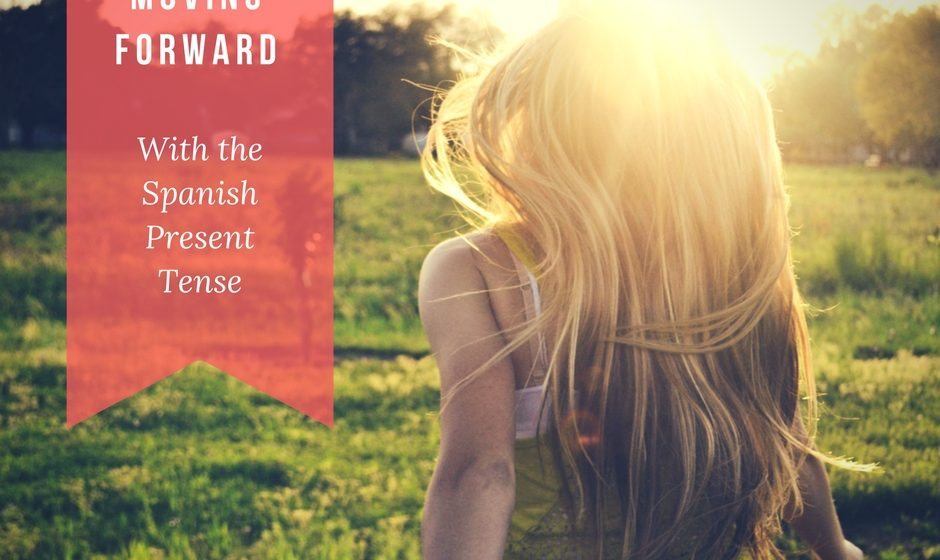 Learning how to use verbs in the present tense is an exciting adventure. You are finally able to expand on your vocabulary, use verbs in your sentences, and have an actual conversation in Spanish.

I remember being elated that I was finally going to be able to ask questions and describe events. I was on my way! My excitement was short lived, however, when I found out there was an entire process to conjugating verbs!

Frustration set in and I was on the verge of giving up. Something had to be done. I decided to change my attitude and take charge of this “process” we fondly call present tense conjugation.

Let’s Talk About the Differences

Spanish is very different from English when dealing with verbs. In English, we pretty much keep the verb the same. By adding a subject in front of the verb, we know who is completing the action.

In Spanish, they don’t do this. They manipulate the verb (by changing the ending) to indicate who is performing the action.

Now, before you freak out on me, don’t worry! We are going to break it down even further.

Basics You Need to Know

Every verb in Spanish has an infinitive form. This what what the verb is called before you conjugate it. Think of it as the verb in it’s purest form. No one has manipulated it. Here are three examples of verbs in their infinitive:

How Do I Identify the Subjects?

All three types of verbs use the same words for the subjects. They never change, no matter what the verb is:

Now let’s put everything together....

First thing you have to learn are the endings of the -ar verbs according to their subjects:

Now, using the verb hablar (to talk) as an example, we take from the -ar ending of the verb, and change it to fit our subject:

Yo hablo a Elena (I talk to Elena)

Nosotros hablamos con la profesora (We talk with the professor)

Let’s look at another example:

Ella escucha al radio (she listens to the radio)

Tú escuchas a la conversación entre Susana y Lupe (you listen to the conversation between Susana and Lupe).

Now you practice! See if you can conjugate the following -ar verbs:

As with all languages, there are always exceptions to the rule. Here are two examples of verbs that follow their own path and ignore the -ar conjugation rules in the Yo form:

The rest of the forms (subjects) follow the pattern of a regular -ar verb.

Here are the endings to -er verbs:

Using the verb comer as an example, we take of the -er ending and change it to fit our subject:

Yo como panqueques (I eat pancakes)

Here is another example:

Your turn to practice! Can you conjugate these -er verbs?

Of course the -er verbs have exceptions. Here are two examples of common irregular -er verbs:

Conjugating -ir verbs is the same as -er verbs with two exceptions; the nosotros and vosotros forms.

Now for those examples:

Nosotros vivimos en la ciudad (we live in the city)

Here are some common examples of irregular -ir verbs:

I Got It! Now How Do I Get Better?

The best way to practice your verbs is through real conversations! If you try to memorize the charts and all the rules that go with it you will just frustrate yourself. Taking the plunge and engaging in real conversations is far more fun that making verb charts!

After a few conversations, you will find that you remember your new verbs in their conjugated form for whatever subject you are referring to.

Remember to focus on ending patterns of the -ar, -er, and -ir verbs as you practice. Your brain will pick up on the patterns and commit them to memory. Once this happens, you will be able to conjugate any verb (in the regular form) without having to memorize thousands of verbs in their conjugated forms.

Don’t place too much focus on the irregular verbs, they will come in time. You will probably use the wrong form of a verb when practicing, but don’t worry! I used to be so embarrassed when I conjugated wrong during conversations, but making mistakes is all part of the process! Native speakers will probably still be able to understand you and applaud your effort.

Conjugating verbs is a learning process that can be frustrating at times. Whatever you do, don’t give up! Keep practicing and converse in Spanish with anyone that you can. The process may not be easy at times, but think about how great you will feel after you master present tense verbs!

All your hard work will pay off in the end, I promise. Don’t forget, we are always here to help so make sure to ask your questions below.