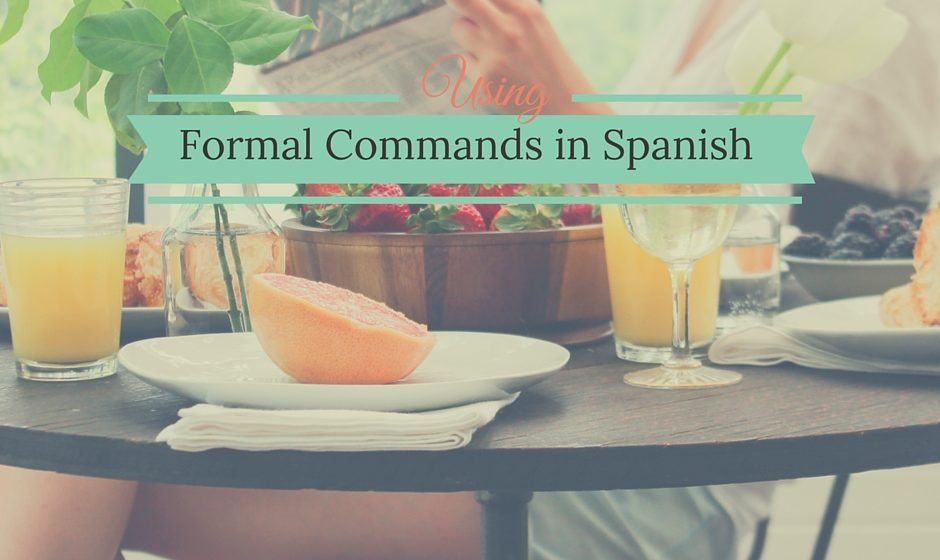 Once, I was in a little café in Barcelona. As I was making my order to the elderly waitress, she said something in an annoyed tone of voice that left me confused—¿Y desde cuándo nos conocemos? "Since when do we know each other?"

This baffled me until I told one of my Barcelonian friends about it and they explained it to me. When ordering, I had used the informal form without realizing it, and the old-fashioned woman took offense at this. By simply taking the time to learn about Spanish formal commands, you can avoid such gaffes.

How to Use Formal Commands

If you're unsure whether you should use an informal or formal command, use the formal one to avoid offense. If the person you're speaking to would prefer that you speak to them informally, they'll say "Tutéame" or "Puedes tutearme" —"Use the tú form with me".

Who to Use Formal Commands With:

Strangers, the elderly, waiters and other employees, doctors, priests, teachers, and your boss This also applies to irregular verbs. If the yo indicative present is irregular, so will be the formal command.

​When using formal commands, be sure to use the correct form depending on whether you're speaking to one person or multiple people. The singular form is for one person, and the plural is for more than one person. Creating the plural form is quite simple: Just add -n to the end of the singular form. Using pronouns with commands can get a little confusing. There are different rules for affirmative and negative commands.

For affirmative commands, the pronouns are placed after the verb. In fact, they are joined with the verb, creating one word.

For negative commands, the pronouns are not joined with the verb, and they are placed before it.

No me lo tráiga.—Do not bring it to me.

No se las pónga.—Don't put them on.

No lo olvíde.—Don't forget it.

No les ayúde.—Do not help them.

Spanish formal commands are easy to create, and easy to use once you get the hang of it. Mastering formal commands will leave you better equipped to gracefully handle social situations with native speakers, and a new level of politeness will be available to you.