Take on the Irregular Preterite Verbs 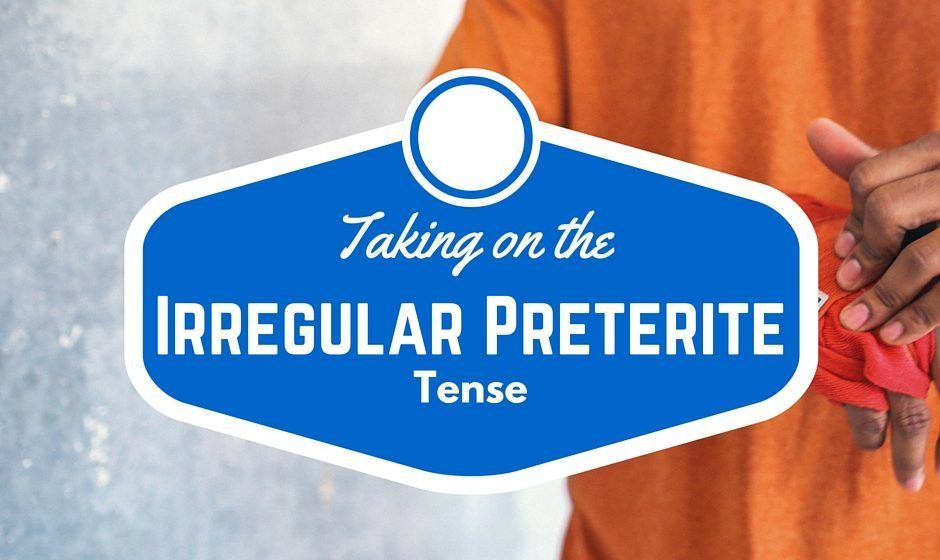 When I was learning Spanish I avoided the past tense all together for a while. The fact that there were two different types of tenses (preterite & imperfect), and that the preterite has so many weird conjugations that didn't make sense to me, it didn't exactly make me excited to learn the Spanish past tense...

Also, as if that wasn't enough, there aren't really any rules behind these weird conjugations. These preterite verbs don't really follow a pattern of any sort, which makes them hard to remember.

Looking back I think my apprehension was overblown.  Yes Spanish past tense is weird, and the preterite tense especially so.  Still it's not impossible to learn.  I learned the past tense (I still make mistakes here and there), and it was actually easier than what I thought it would be.

So keep your head up. Get through these irregular conjugations and the worst will be behind you.  You can do it!

Intro to These Irregular Verbs

The most important thing to remember about these verbs is that they typically don't follow any rule or pattern in their conjugation.  For whatever reason these verbs are different from the rest and to remember them we're going to have to use them until we get used to them.

Don't let that discourage you though.  Just like any other part of language, after you use them enough times these conjugations will begin to feel like second nature.

The Four Most Common

Here are the four irregular preterites that you are likely to see the most often.  We tried to select the most common irregular verbs for this post, but these four are extra special because you will use them the most.

Special note about Ir and Ser:

Ser and Ir are actually identical in their preterite  conjugation.  I didn't know this for a while when I was first learning Spanish, and I can't tell you how confusing it was.  Once I took the time to actually look up their preterite conjugations is wasn't so bad.  I think the fact that their identical makes it easier to remember.  It's like a 2 for 1 deal.   ​

You will always be able to tell with verb is being used by the context of the sentence it's in.  Also, the preterite form of ser isn't used all that often, which helps.​

How to practice these irregular verbs

Use them in conversation

I have always found that the best way to learn a new word, tense, or conjugation is to use it in a real conversation.  Taking a cue from our "cheating" conversation method, I would make a list of 3-5 of these preterite verbs, and then think of a story I could tell in the past tense to use them. I'd then practice a native speaker either online through a  private lesson or language exchange, or just practice with one of my Spanish speaking friends.

This way I can tell the story and refer to my list if I get stuck.  Usually after I've used a new word 2 or 3 times I have a much easier time remembering it. I can't speak for others but for me this has proven more effective than trying to just memorize each conjugation with flashcards. It's also a lot more fun.

Here's the song I mentioned before 😉