Preterite vs. Imperfect Tense (Which to Use & When) 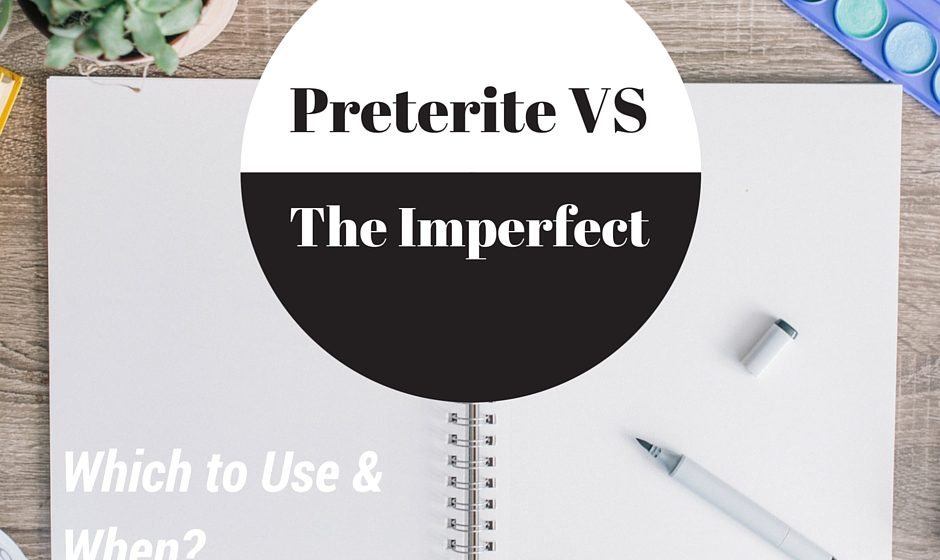 To be honest, learning the differences between the two Spanish past tenses was ridiculously difficult for me, as I had lived my whole life speaking English, where verb tenses are not nearly as clearly defined. Today, I'll make it easier for you by explaining the differences that I learned as I was mastering Spanish verb tenses.

Here's a little help from our friend Jordan at Gringo Español

For regular -ar verbs, to form the preterite you drop the -ar and replace it with the correct preterite ending.  Here's an example with the verb caminar (to walk):

We do the same thing will verbs ending in -er and -ir.  Here's an example with the verb comer (to eat):

Of course, some verbs will have irregular conjugations in the preterite. Some of the most common of these include: ser, ir, dar, hacer, estar, poner, tener, haber, querer, venir, andar, poder, and saber. You will need to memorize the six preterite forms for each of these irregular verbs.

The imperfect is used to denote an action that took place in the past, but the specifics of the timeframe are left up in the air. We use the imperfect in English, too.

They were eating dinner when I arrived.

Using "were" plus the gerund denotes the imperfect past in English. Here, we know that the action of eating dinner took place in the past, but it does not have a definite beginning or end, nor does it matter for the sentence's purpose.  We don't know when they stopped eating dinner, but in this sentence it doesn't matter because we are more focused on the fact that they were eating.

Another example of the imperfect in English might be:

I used to go fishing with my dad.

"I used to go" denotes that something used to occur before but now it doesn't.  Again when using the imperfect we don't care so much about the details of what happened (when I do, how did I, when did I stop going) the important fact in this sentence is that there was a time when I would go but I no longer go anymore.

When forming the imperfect for a regular -ar verb, drop the -ar just like in the preterite conjugation but this time we add the imperfect ending.  Here's an example using caminar again:

Luckily, there are only three verbs that are irregular in the imperfect past: ser, ver, and ir.

Some Verbs Change Meaning Depending on Tense

(I met the prime minister).

(They already found out about the movie.)

(He received a letter from his grandmother.)

(I tried to find the book.)

Yo no quise ir al supermercado.

(I refused to go to the supermarket.)

(They succeeded in buying a car.)

(We failed to open the door.)​

(I knew the prime minister).

(They already knew about the movie.)​

(He had a letter from his grandmother.​)

Yo no quería ir al supermercado.

​(I did not want to go to the supermarket.)

(They were able to buy a car.)

(We weren't able to open the door.)

Distinguishing Between Preterite and Imperfect

What you did  vs What you were doing

Toqué el piano - I played the piano (and I finished the action).

Yo tocaba el piano - I used to play the piano; or, you are saying that you were playing the piano when setting the scene for a story. Me comí la manzana - I ate the apple. The action is complete.

Yo comía la manzana - I was eating the apple (when something else happened).

Yo leía el libro - I was reading the book (and the start and end times don't matter).

What happened vs The way things were

Another way to look at it is that the preterite is for talking about things that happened in the past, while the imperfect is for the way things were in the past. Using the same sentences:

Toqué el piano - I played the piano (yesterday, or that night, or whatever specific timeframe context provides)

Yo tocaba el piano - I used to play the piano at some point in the past, but I don't anymore.

Me comí la manzana - I ate the apple (yesterday night).

Yo comía manzanas - I used to eat apples (and maybe I don't anymore).

Yo leí el libro - I read the book.

Yo leía libros - I used to read books.

When reading or listening to Spanish, you can use context clues to figure out whether a verb phrase is in the preterite or imperfect tense. Certain temporal phrases are associated with either the preterite or the imperfect. You can also learn these phrases to help you express yourself better.

Phrases that hint toward the preterite:

otro día - the other day

en ese momento - at that moment

Phrases that hint toward the Imperfect:

todo el tiempo - all the time

Mastering the Two Spanish Past Tenses

One of the most efficient ways to master any Spanish grammatical concept is to practice with another person who can give you feedback and constructive criticism. Story-telling is an excellent form of practicing verb tenses.

Try telling a story to your tutor or friend and having them correct you on your mistakes. Then, have them tell you a story in return, and pay attention to their choice of verb tense.

Another way you can get the hang of Spanish grammar is to watch your favorite TV shows and movies, but turn on Spanish subtitles. Pay attention to the sentences in English that are past tense, and make note of which verb tense they use in the Spanish subtitle.

Other media, such as Spanish-language movies or even videos like these can solidify your Spanish skills. Practice quizzes are also enormously helpful, such as this one.

Distinguishing between the preterite and the imperfect is one of the most challenging aspects of learning Spanish, and it's also one the most important.  That being said, it's not impossible.  With a little know how and a lot of practice you should be able to use both with no problems

Leave a comment if you have any questions about these two slightly tricky verb forms!