The Impersonal and Passive Se 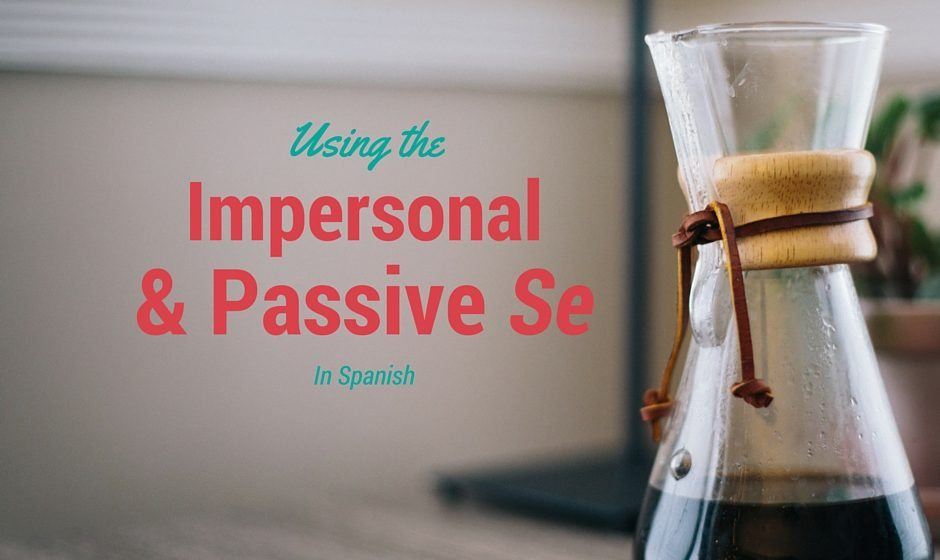 The Spanish pronoun se can be a bit confusing for new Spanish learners. It's used in several different ways, and if you aren't familiar with them it's easy to get lost.  I remember first learning about reflexive verbs (which also use se), and then thinking that this was the main way se was used.  It didn't take long before I came across other uses of the pronoun that made absolutely no sense to me.

Fortunately there is a rhyme and reason behind the use of se and, like most things in Spanish, once you know the rules and practice them a bit ​se will lose some of its mystery.  In this post we'll cover two common ways se is used: the impersonal way and the passive way.

An impersonal expression is a phrase that we say without having anyone particular in mind. For instance when talking about the weather in English we might say, "They say it's going to snow tomorrow".  When we say "They say", we aren't talking about anybody specifically, it's more of a general "they".

Similarly when we ask a question like, "How do you say knife in Spanish?", we're not asking the other person how they say "knife", we are asking how the word "knife" is said in Spanish (again in a general sense).

In Spanish to make an impersonal expression ​we simply add the pronoun se in front of the él/ella conjugation of a verb.

We can also use the pronouns se when we are speaking in a passive voice.  In both English and Spanish the passive voice is used when we describe what has happened to a person, place, or thing but we don't say who or what did it. For example:

It can be hard to make any sense out of the se pronoun if you don't know the rules behind it's different uses.  In the end the rules aren't that complicated and se isn't too difficult to use.  Hopefully this post helped clear up some of the confusion you might have had!